The cost of developing drugs has grown dramatically over the past 10 years, reaching nearly $1 billion for a single new drug in 2018, at times resulting in little or no access to lifesaving medicine for patients.1 An emerging field, called regulatory or drug development science, focuses on solving this challenge by generating innovative solutions that minimize risk and facilitate decision-making throughout the drug development process. Critical Path Institute (C-Path), established in 2005, is an independent nonprofit and worldwide partner of excellence in this field. C-Path serves as a neutral third party that convenes stakeholders, curates data, generates innovative solutions and accelerates drug product development. 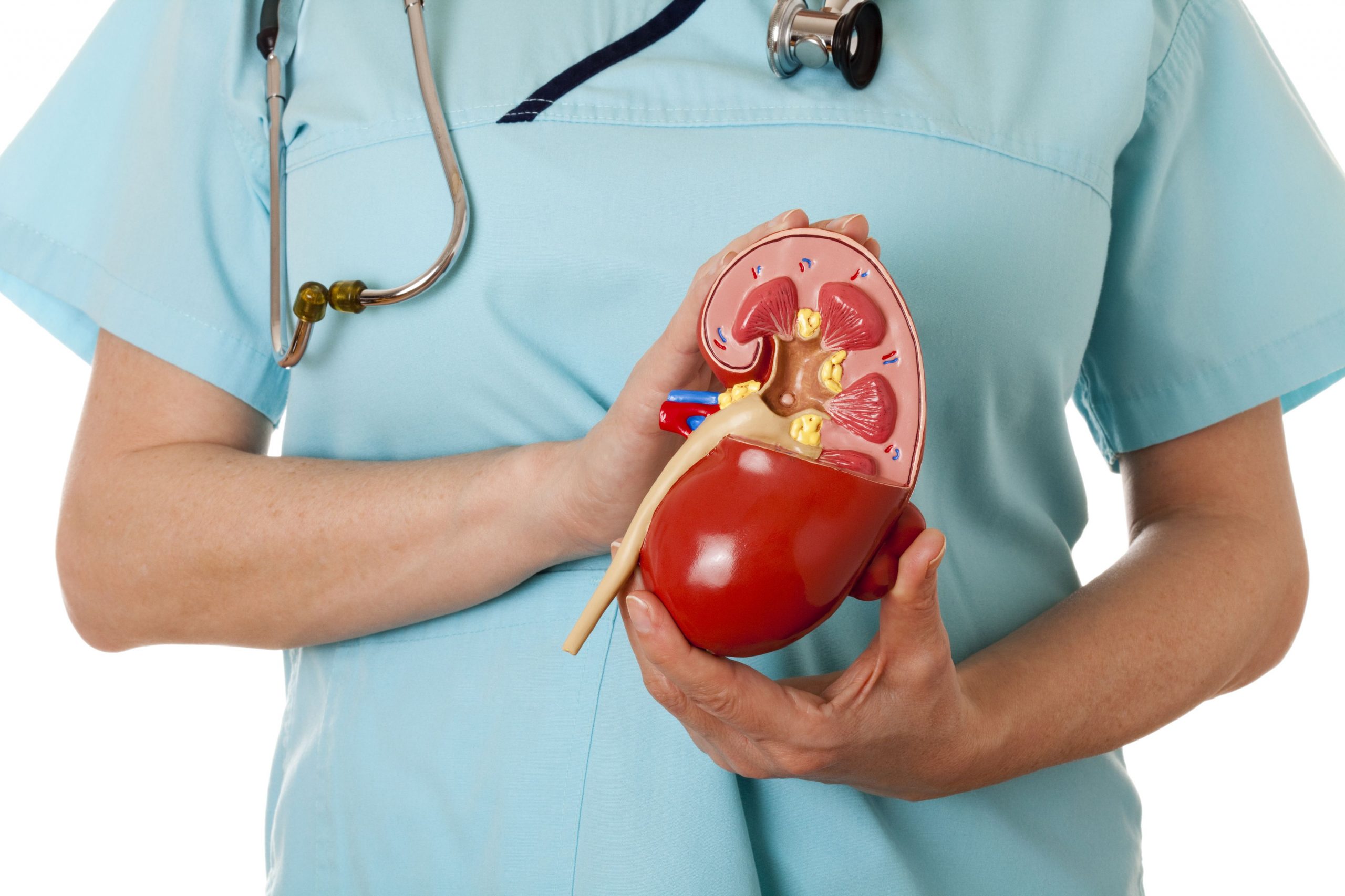 The first approved treatment for ADPKD is available now

An orphan condition that has benefited from advances in drug development is autosomal dominant polycystic kidney disease, or ADPKD. ADPKD is a debilitating genetic disease which results in fluid-filled cysts developing in the kidneys.2 These cysts grow larger over time, making the kidney less and less functional, ultimately leading to kidney failure.3

In 2010, no drugs were available for people living with ADPKD to prevent or slow the progression of the disease. A single drug, called tolvaptan, was under development, but many questions remained regarding how to best design adequate and efficient clinical trials for this or other drugs. These questions included how to identify which characteristics made patients optimal candidates to participate in clinical trials, how to best track the progression of the disease over the course of a trial, and how to determine whether or not the drug was working. 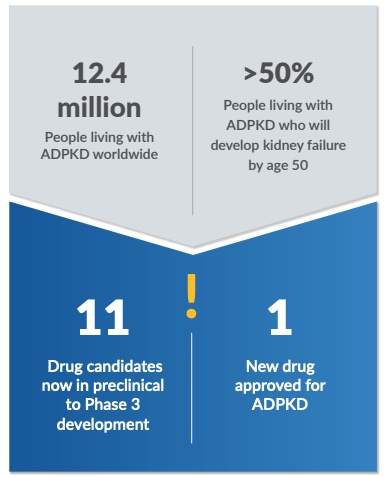 To address these challenges, C-Path launched the Polycystic Kidney Disease Outcomes Consortium (PKDOC) in 2010. PKDOC serves as convener, curator, innovator and accelerator in the ADPKD community to generate solutions that accelerate drug development science for individuals living with ADPKD.

As a convener, PKDOC has brought together stakeholders from patient advocacy groups, including the PKD Foundation, academic researchers, pharmaceutical industry companies, and representatives from regulatory and other government agencies around the world. Together, these stakeholders were able to use their knowledge, expertise and data to unlock key drug development questions in ADPKD.

As a curator and innovator, PKDOC led the development of an aggregated and integrated patient-level database of ADPKD registries and studies. These data sources included important information, like an innovative kidney imaging biomarker, called total kidney volume, or TKV. TKV is a measure of an individual’s kidney size and can be used to indicate the change in kidney size over time. This metric was used as the foundation for a 12.4 million People living with ADPKD worldwide >50% People living with ADPKD who will develop kidney failure by age 50 11 Drug candidates now in preclinical to Phase 3 development 1 New drug approved for ADPKD ! quantitative disease progression model, which served as the underlying evidence to support the endorsement (qualification) of the use of TKV to optimize patient selection in ADPKD clinical trials by the U.S. Food and Drug Administration (FDA) and the European Medicines Agency (EMA) in 2016. In 2018, the evidence provided by the model also led to FDA designating TKV as capable of tracking disease progression and measuring efficacy of novel drugs in ADPKD clinical trials (i.e., a reasonably likely surrogate endpoint).

As an accelerator, PKDOC’s contributions have enhanced the ADPKD drug development process. TKV was accepted as the basis of approval for JYNARQUE® (tolvaptan), the first treatment to slow kidney function decline in adults at risk of rapidly progressing for ADPKD. The designation of TKV as a reasonably likely surrogate endpoint has helped to stimulate a robust ADPKD drug development pipeline that now includes more than 10 drug candidates under evaluation from preclinical to the late clinical stages of testing. PKDOC continues its work to generate solutions that further accelerate ADPKD drug development.

The collaborative construct provided through C-Path’s consortia has led to a generation of actionable solutions that enable the positive transformation of the drug development process. As a result, patients have access to better and safer drugs earlier than they otherwise would. 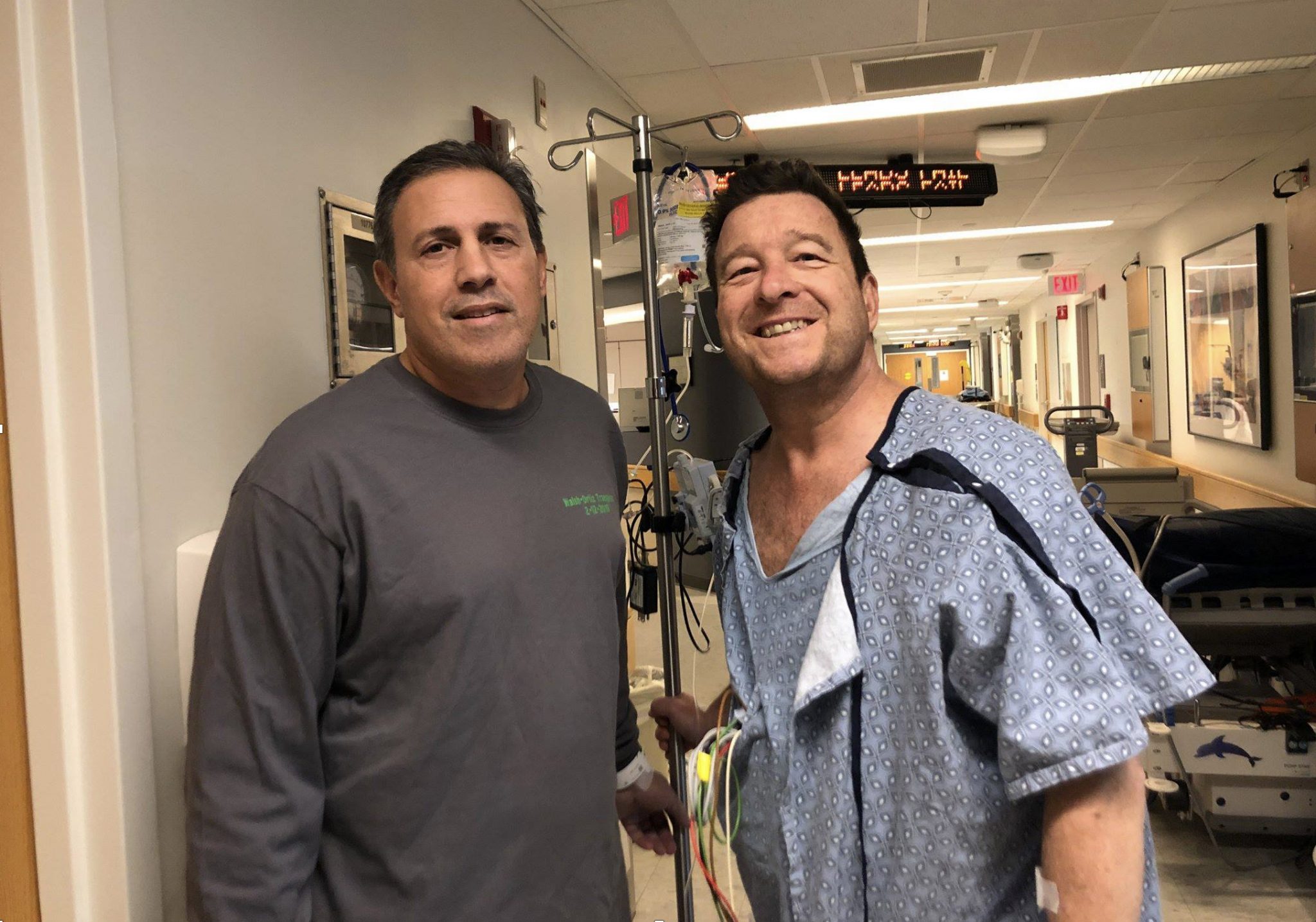 John (right) and his friend and kidney donor, Augie, just after the transplant in February 2019.

John Walsh of Albany, NY, inherited polycystic kidney disease from his mother. PKD causes cysts to grow in the kidneys, eventually causing them to lose function entirely (end-stagekidney failure). He and his four siblings each had a 50/50 chance of having the condition passed down to them — all five of the Walsh brothers and sisters inherited it. The Walsh family has been living with the effects of PKD for more than 20 years. The progressive nature of the disease calls for the development of novel drugs to halt or delay the disease course.

While their mother died from the disease in 1993, each of the Walsh siblings has needed — and has received — a successful kidney transplant. These transplant organs have been donated by a family member, friend or even by complete strangers.

John was the sixth person in his family to undergo a kidney transplant (his niece also inherited PKD and needed one before John). When his turn came, it was John’s lifelong friend, Augie Ortiz, who stepped up to help. “Think about tapping someone on the shoulder and saying, ‘Hey, any chance you have two healthy kidneys and can I have one of those?’ Regardless how good of a friend you are, it’s a crazy thing,” John said.

Through it all, John and his family have been adamant about sharing their stories and raising awareness about organ donation, and importantly, PKD research and drug development. Novel drugs that help delay or prevent end-stage-kidney failure in people living with PKD carry immense promise for this community. The Walshes all feel extremely blessed to have been able to witness and receive the generosity of others.